Frequently during the semester you will need to describe bacterial (or fungal) growth observed on slants or Petri plates. It will be useful to learn the terminology used for describing common colony types. The following outline will be helpful for verbally communicating the appearance of observed colonial growth.

1.    Form – The form refers to the shape of the colony. These forms represent the most common colony shapes you are likely to encounter.


1a. Size – The size of the colony can be a useful characteristic for identification. The diameter of a representative colony may be measured in millimeters. Tiny colonies are referred to as punctiform.

1b. Surface – How does the surface of the colony appear? Bacterial colonies are frequently shiny and smooth in appearance. Other surface descriptions might be: veined, rough, dull, wrinkled (or shriveled), glistening.

1c. Color – It is important to describe the color or pigment of the colony. Also include descriptive terms for any other relevant optical characteristics such as: opaque, cloudy, translucent, iridescent.

2.    Elevation – This describes the “side view” of a colony. These are the most common.

3.    Margin – The margin or edge of a colony (or any growth) may be an important characteristic in identifying an organism. Several examples are shown below. 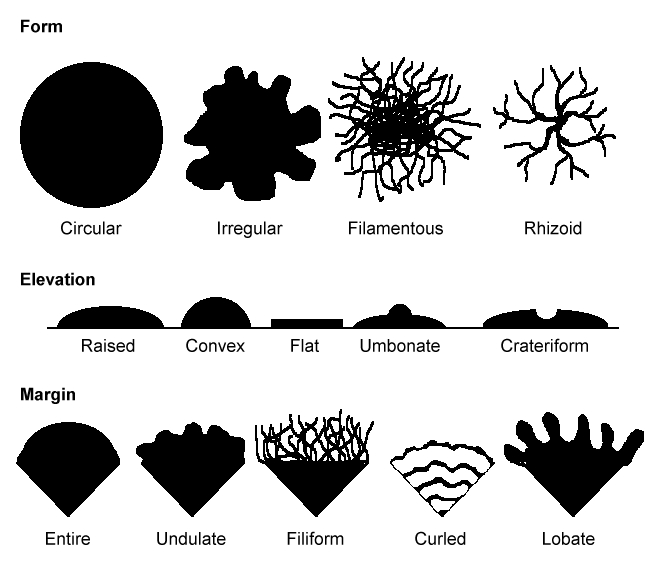 Practice describing the form, surface texture and color of the following colonies.  All bacteria were photographed at 30x magnificaton.

Bacterial conlonies can have very distinct marginal patterens.  Practice with the colonies below.

Bacteria will grow at different elevations.  Practice describing the elevations of the following colonies.