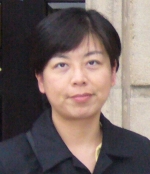 Toward E-Commerce Website Evaluation and Use: A Balanced View

Zhang, Ping and Na Li. (2004).
An Assessment of Human Computer Interaction Research in Management Information Systems: Topics and Methods,
Computers in Human Behavior (CHB), Vol.20, No.2, pp.125-147
This paper was the 4th most downloaded articles at the CHB website during January-June 2004, the 6th during September-December 2004, and the 19th during January-March 2005